ACS Says "No" to Just One Day for Second Year 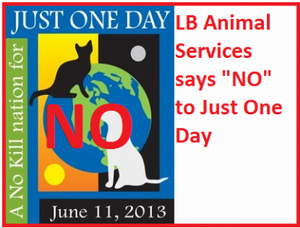 For the second year in a row, Long Beach Animal Care Services has declined to sign the Just One Day pledge and said it would not hold an adoption event to commemorate this nationwide effort to bring an end to shelter killing for Just One Day. Stayin' Alive Long Beach met with Director Stevens last month to present a petition signed by more than 500 supporters and to discuss ACS's efforts to decrease shelter killing. Just One Day and the No Kill Equation both got  a "No Go"  from Director Stevens. The No Kill Equation is a suite of 21st century shelter programs that includes vigorous foster outreach, cooperation with rescue groups, and proactive volunteer recruitment. Currently, ACS is only minimally implementing each of these essential programs. Stayin' Alive Long Beach has done extensive analysis of the Long Beach shelter's programs and will be publishing a report in the near future that we'll be presenting to the Long Beach City Council. Long Beach will remain a high-kill shelter as long as the residents of Long Beach allow it to remain so.  Please support the shelter animals of Long Beach. Let your elected officials know that it's time for a new approach to animal sheltering.   Let them know - it's time to stop the killing. 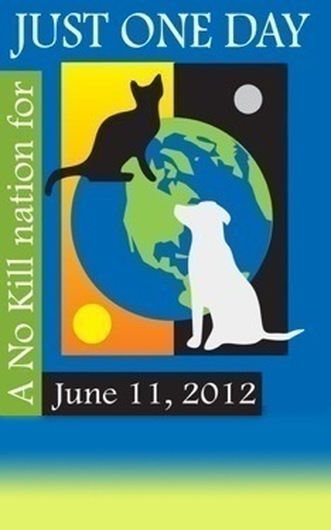 Last year in 2012, Stayin' Alive Long Beach asked Ted Stevens to sign the JUST ONE DAY pledge and sign on to this national effort with a commitment to not kill animals on that day.  Mr. Stevens declined to sign the pledge, but said that they would make an "operational decision to support the event, Just One Day, in spirit and not euthanize any healthy adoptable animals on that day."

Long Beach Animal Care Services was closed on June 11, 2012.  It is highly likely that animals weren't going to be killed on that day anyway, rendering the "operational decision" just so much hot air.

This year, we are once again asking LBACS to sign the pledge and this time, to also stay open to the public and proactively encourage adoptions on Tuesday, June 11,  a day when they are normally closed, and join shelters across the nation in making June 11th a good day for countless animals that otherwise would have been euthanized, giving them just one more day for that person to walk through the doors and adopt them.

Why wouldn't LBACS sign the pledge and work Just One Day to save Long Beach's animals?  We're as puzzled as you are. If they advocate for and support animals as much as they claim to, you would think they would jump at the chance to do show their commitment to helping animals. And yet, this wasn't the case.

This year, we are renewing our request to Ted Stevens at Long Beach Animal Care Services, asking him to sign the pledge, stay open and proactively pursue adoptions on June 11.

Please help us make Long Beach a kinder place for animals and humans by signing the petition. To learn more about JUST ONE DAY, click here.